Shoot The Aliens: A game that changed my life

A few days ago, I came across an old game that I had developed back in high school. I started working on this game because I had the feeling that I had not yet produced any meaningful project. My projects at that time were small or unfinished Web 1.0 websites, simple console applications, but nothing that was either finished or that I could show to others. Remember, when you were in high school, not everyone was interested in creating a tool to encrypt and decrypt text.

So I had this goal to make a game! It should include only a small set of features, to make me able to finish the project before getting bored of it; should be simple, thus in 2D and with a limited set of inputs, because I wanted to be able to overcome potential issues that may arise when doing 3D games for example; last but not least: I had to do EVERYTHING by myself (without challenge, life is like a dish without salt), meaning code, graphics, music and sound design 🥵. Oh and I didn't really knew about game engines, so... I developed the game in C++ with the SFML library (a very good one IMHO). I also ended creating a web page on itch.io to make the game downloadable and it even came with an installer.

The game principle is quite simple: you control a spaceship on the bottom of the screen, you can go left or right, it shoots by itself at refular interval. Then there are aliens ships, they come from the top of the screen and go downward while shooting. You have to Shoot The Aliens to earn points, or at least don't let them kill you or crash into you. They will come faster and faster with time so it gets harder and harder. Then the game shows your high score and last score, hit space and here we go again! 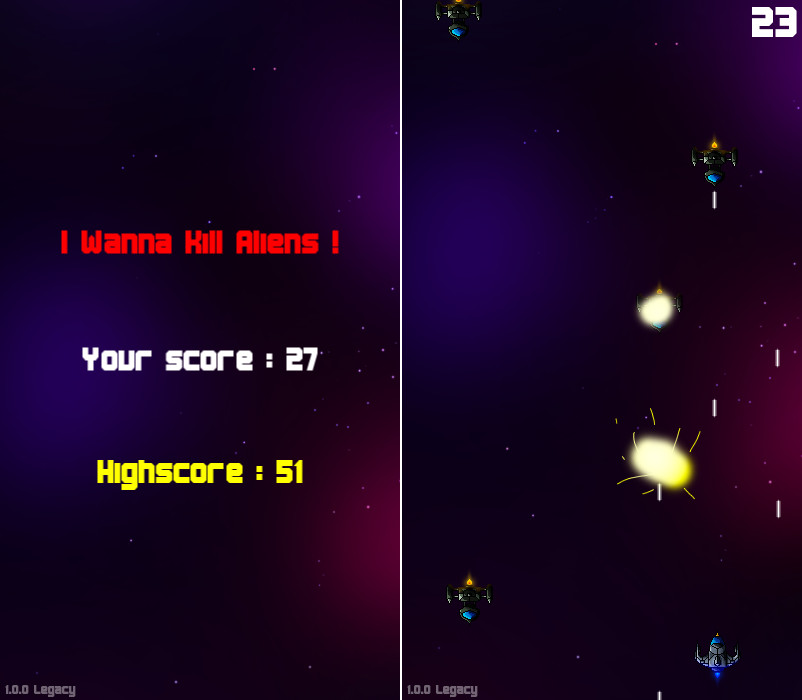 It was such a pleasure and an enlightenment to work during about 6 month on this project, I learnt a lot and for sure, this experience confirmed the feeling that I had at this time, I really wanted to work in development. It was tough, but duuude it was fun.

After tinkering a bit in this 8 years old backup of my development projects, I was so surprised and grateful to find that in the game directory, I found a .git directory. This git repo had never been pushed anywhere yet, but here it was: my very first git commit ever. And actually the only one in this repository 😅 I was just discovering git so I only started to use it at the very end of the project. But after this finding, I released the source code on github (https://github.com/paullaffitte/shoot-the-aliens-legacy), I also added a CMakeLists.txt in order for people to recompile it if they want but I tried to keep changes as small as possible so the game is exactly the same than it was back in time. Same assets, same source code.

In the future I would like to release new updates of this game, but I will do it in another repository, the "legacy" one is for historical purpose only if I may say so. I already started with improving hitboxes (they were only dumb rectangles), and I will probably post here again when I decide to release a new version. Until that, try to remember what drove you to make the choice you did years ago, to do what you do now. I think it can be very instructive.